In Part 1 of this series, I presented a brief description of test driven development (TDD) and discussed how it differs from traditional approaches to software development.  In this post I will share six key benefits of using TDD for your software project.  In Part 3, I will take a closer look at some of the reasons TDD may not work for your project and suggest some critical questions to ask before deciding.

In one of my previous projects, I was working on a portable ventilator that could be used in rescue helicopters.  One important upcoming feature was detecting blockages in the breathing circuit.  At the time, the customer requirement was:

The system shall detect blockages in the breathing circuit.

The team gathers around the white board and comes up with a stellar design. They spend a week or two implementing it. The time comes to write the test. The test engineer looks at the requirement and scratches her head. “What do we mean by ‘blockage’?” she asks.

The software team looks around. “When there is no flow,” one of them says.

Fortunately, the Product Owner happens to be walking by at that moment. “That’s not right,” he says. “We must be able to detect even partial blockages!”

The team discusses it and comes up with a more specific quantifiable requirement. Sadly, the original design did not account for this and the time already expended on this feature has been lost. Had the Product Owner not been walking by, even more time and development cost might have been wasted.

By writing the test first, we are forced to take a closer look at the requirements early on in the process.

The act of asking the “but, what if..” questions early does two things:

2. “You Aren’t Going to Need it” TDD = Less Production Code

Sometimes called YAGNI, “You Aren’t Going to Need It” is a programming principle that says developers should not add unnecessary functionality to a system. It is along the same lines as “Keep It Simple, Stupid (KISS)”, and “Minimum Viable Product” (MVP).

With TDD, we only write the code that is needed to pass the test. This yields less production code, which has many downstream benefits, as will be discussed below.

Let’s go back to the ventilator example. The vent needs to operate in a helicopter, so the team has been tasked with implementing a barometer feature that measures ambient pressure and altitude. The sensor is quite capable; It can be commanded through software to give pressure data in units of kPa, psi, mmHg, or altitude directly in feet and can have a sample time of 2 ms, or 4 ms, 8 ms, or 16 ms.

Given the variety of options available from the sensor, it wouldn’t be uncommon for the developer to implement a communication architecture with commands to change both the barometer’s sample time, and the measurement units.

However, knowing that we are doing TDD, the software developer first writes a test based on the requirement, which is something along the lines of:

Imagine if the team had implemented the full communication system described above. As this is a medical device, all of the software in the device must be tested, which means we must write additional functional tests and additional unit tests to cover each of the different sample rates and pressure units. Further, regulatory documentation requires diagrams and descriptions of this more complex software architecture. When the development team runs regression tests, they must ensure that this additional functionality continues to work.

Because developers will be writing the test first, using TDD will encourage them to design software with testability in mind.  For example, it is much easier to test loosely coupled, modularized units of software, so developers will often write production code in this way.  As a result, the release code will likely be more extensible and easier to maintain.

Design for testability will usually result in smaller, more focused units of code, because this makes writing the test easier.  Because the software units are smaller, it is also easier to find and resolve software defects.  As a result, we’re likely to have a fewer bugs on release.  For medical devices and other safety-critical projects, defects in the release can lead to delayed regulatory approvals or a device recall.

Because TDD can instigate a greater level of rigor in testing, this process often leads to a more comprehensive suite of tests and higher test coverage.  Both results are especially beneficial for projects in the medical device or other safety-critical industries.  For premarket approval (PMA) of medical devices, high coverage is essential for safety-critical systems. For FDA 510(k) applications, these test suites can be used to help prove equivalence with predicate devices. In both cases, the better the documentation included in your medical device’s Design History File, the better the chances of a smooth submission.

By following TDD, we must write the test early and therefore it must be based on a specific requirement.  This creates the traceable link between test and requirement.  During the implementation step, we only write the code that is needed to pass the test.  This creates an additional traceable link between the software artifact and the test.  Combining this means that we will have full traceability between our requirements, test, and software artifacts.

Without discipline of TDD, we may write and run all of the tests at the end, after all code has been written.  These tests may be based on requirements, but we will have to go back into the code to determine which software artifacts satisfy which tests.

Doing traceability at the end takes more time and can often reveal gaps that need to be filled late in the project lifecycle. 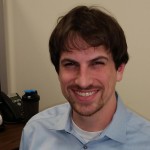 Chris Sears is a Principal Biomedical Engineer at Syncro Medical. He received a BS in Engineering from Harvey Mudd College and a PhD in Biomedical Engineering from UCLA in the Center for Advanced Surgical and Interventional Technology (CASIT). Dr. Sears has particular expertise in tactile feedback for robotic and tele-operated surgical systems. He has worked in industry in ventures related to robotics and mesh networking, and on medical device projects for the Telemedicine and Advanced Technology Research Center (TATRC), Center for Innovative Minimally Invasive Therapy (CIMIT), Defense Advanced Research Projects Agency (DARPA), and several government medical research groups. In 2012, he was certified by the California State Board as a Professional Engineer in Computer and Electrical Engineering.